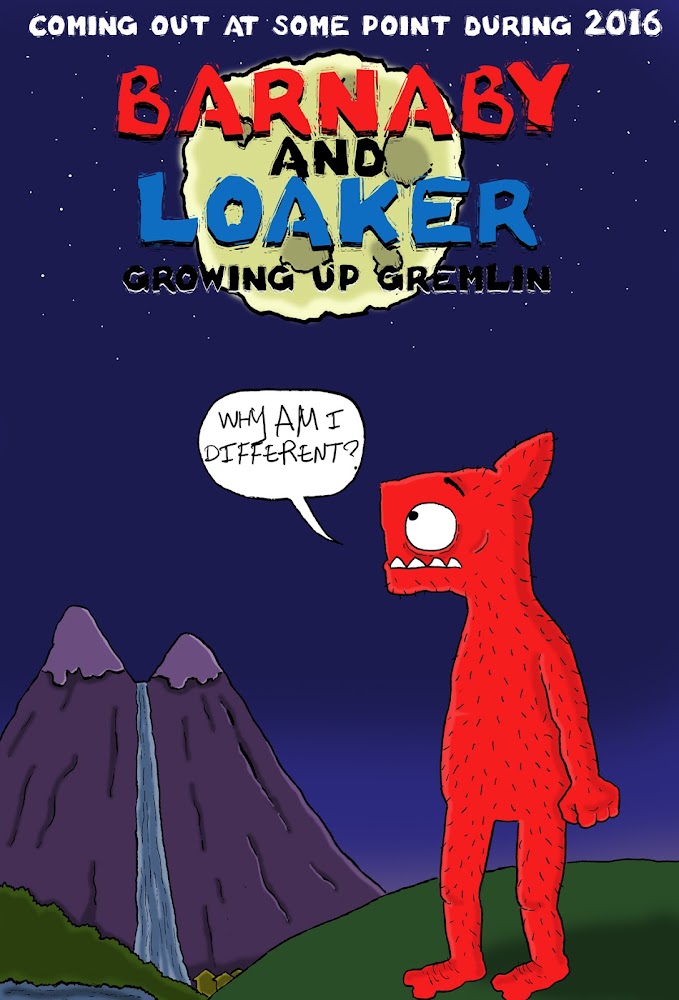 Working on a graphic novel based on my webcomic series. The graphic novel will give a more detailed view of what it means to be an outsider in a town of outsiders. The main storyline will be Barnaby contemplating his Gremlin heritage. All the characters from the webcomic will appear in the book.
Posted by Barnaby and Loaker at 16:08 2 comments:

"Things sure have changed here in Moloch Falls..." Special #6

Special#6: "Things sure have changed here in Moloch Falls..."

In the distant future, Loaker returns to Moloch Falls...

This is the final issue of the six specials as well as the last issue of Barnaby and Loaker.

The title of this issue is a reference to the 1971 American TV show The Waltons, created by Earl Hamner Jr. The series showed the life of a Depression-era family in Virginia's Blue Ridge Mountain.

This is the first flashforward issue in the series as every other issue either took place in the present or in flashbacks. This issue takes place several decades in the future where all the other main characters, apart from Loaker, have passed away. Loaker is visibly elderly and can now speak some english.

The Pooka caretaker that appears in this issue is similar in appearance to Feigenbaum's Nephew Zero who first appeared in issue#60: "The Pooka's Nephew". However the pooka in this issue doesn't seem to recognise Loaker. Loaker has met Zero several times.

The caretaker also mentions that an earthquake happened in Moloch Falls. This is the second mentioned earthquake in the series. The first earthquake occured in 1986 and is first mentioned by Barnaby in issue#102: "The Gremlin Who Knew Too Much".

The rabbits that appear in the panel with the graves of the main characters are descendants of the grumpy bunny Beauregarde. They are the result of the character's marriage in Special#2: "A Marriage in Moloch Falls".

The tree that has appeared on the hillside in many issues including issue#104: "Barnaby and Loaker" has been cut down.

The graves of the main characters reveal that Barnaby died aged 53. Kathy Dudbert finally married Barnaby Banks and died aged 66. Bancroft died at the early age of 29 and Emily Hair died aged 69. Beauregarde's death isn't mentioned but due to the life expectancy of a rabbit, we can assume that he has passed away. Feigenbaum's death isn't mentioned because he is at least partially imaginary although the fact that he isn't with Loaker would imply that he has also possibly died or been forgotten about. Loaker dies at the grand old age of 100 after finally returning to his childhood home one last time.

I'd like to say a massive thank you to everyone who has supported Barnaby and Loaker and kept up to date with the issues since I started it back in 2013. It's been a lot of fun drawing these characters and it's quite sad to see it finish after a couple of years but I think the time is right. This issue serves as an ultimate ending to the character's lives but there are plenty of years inbetween that were never seen. Maybe one day I'll go back to Moloch Falls and show you some more of their adventures but for now I'd just like to say thank you and goodbye Barnaby and Loaker!

The gang discuss an old creepy house at the edge of Moloch Falls...

This is the fifth of the final six special issues of Barnaby and Loaker.

The title of this issue is a reference to Most Haunted, a British paranormal reality television show. The progamme investigated purported paranormal activity around the United Kingdom. The issue is also inspired by the idea that most small towns having an old creepy house just on the edge of town.

The group have a discussion of about the house. Bancroft believes that Molochstein lives in the house. Molochstein was a troll like monster who first appeared in issue#54: "No Gremlin Is An Island". Barnaby corrects him by informing the group that Molochstein stayed in their shed for a time in issue#57: "The Monster at the End of the Garden" until issue#59: "Where The Wild Things Go".

Barnaby believes that the house is made up from the bones of Moloch's ancestors. Moloch was a giant monster who lived hundred of years ago and is the town's namesake. Interestingly, Barnaby and his brother Loaker are both distant descendants of Moloch.

Emily Hair continues to confuse and baffle the other members of the group by being obsessed with colour.

Feigenbaum is revealed to be the resident of the creepy old house. This is the first indication that Feigenbaum even requires a home as the character is at least partially imaginary.
Posted by Barnaby and Loaker at 00:56 1 comment:

This is the fourth of the six final special issues of Barnaby and Loaker.

The issue details the first encounter between Loaker and Feigenbaum. Baby Loaker wanders off and gets lost in the woods but he is soon found by the Pooka Feigenbaum who proceeds to reassure the young gremlin and take him back to the Banks Family. This chance encounter eventually leads to the unbreakable bond of friendship seen throughout the 104 issue series.

This is the second flashback issue in the series. The first flashback was in issue#66: "The Grandfather" which was set ten years ago. This special issue is set nine years ago. It is worth mentioning that Loaker already has his teddy bear that bears a strong resemblance to Feigenbaum at this point in the timeline. Also this issue shows that Feigenbaum hasn't really appeared to have aged a lot in comparison to Loaker.

The title of this issue is a play on the 1989 American romantic comedy film "When Harry Met Sally..." directed by Nora Ephron and starring Billy Crystal and Meg Ryan as the titular characters. The film raises the question "Can men and women ever just be friends?" through the many meetings between the two main characters.
Posted by Barnaby and Loaker at 16:22 1 comment: 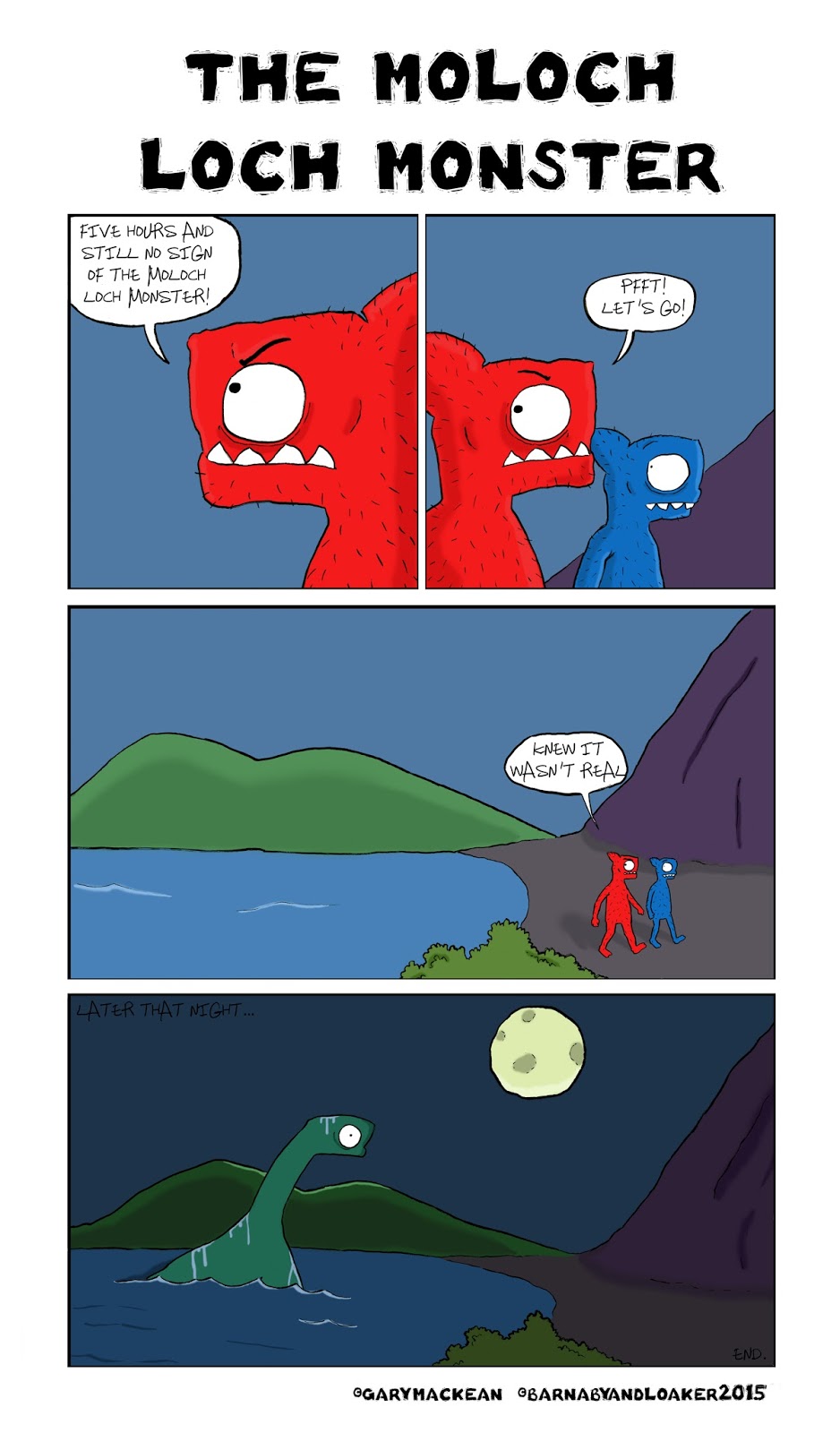 A Loch is the Irish and Scottish Gaelic word for a lake and a sea inlet.
Posted by Barnaby and Loaker at 00:50 1 comment: 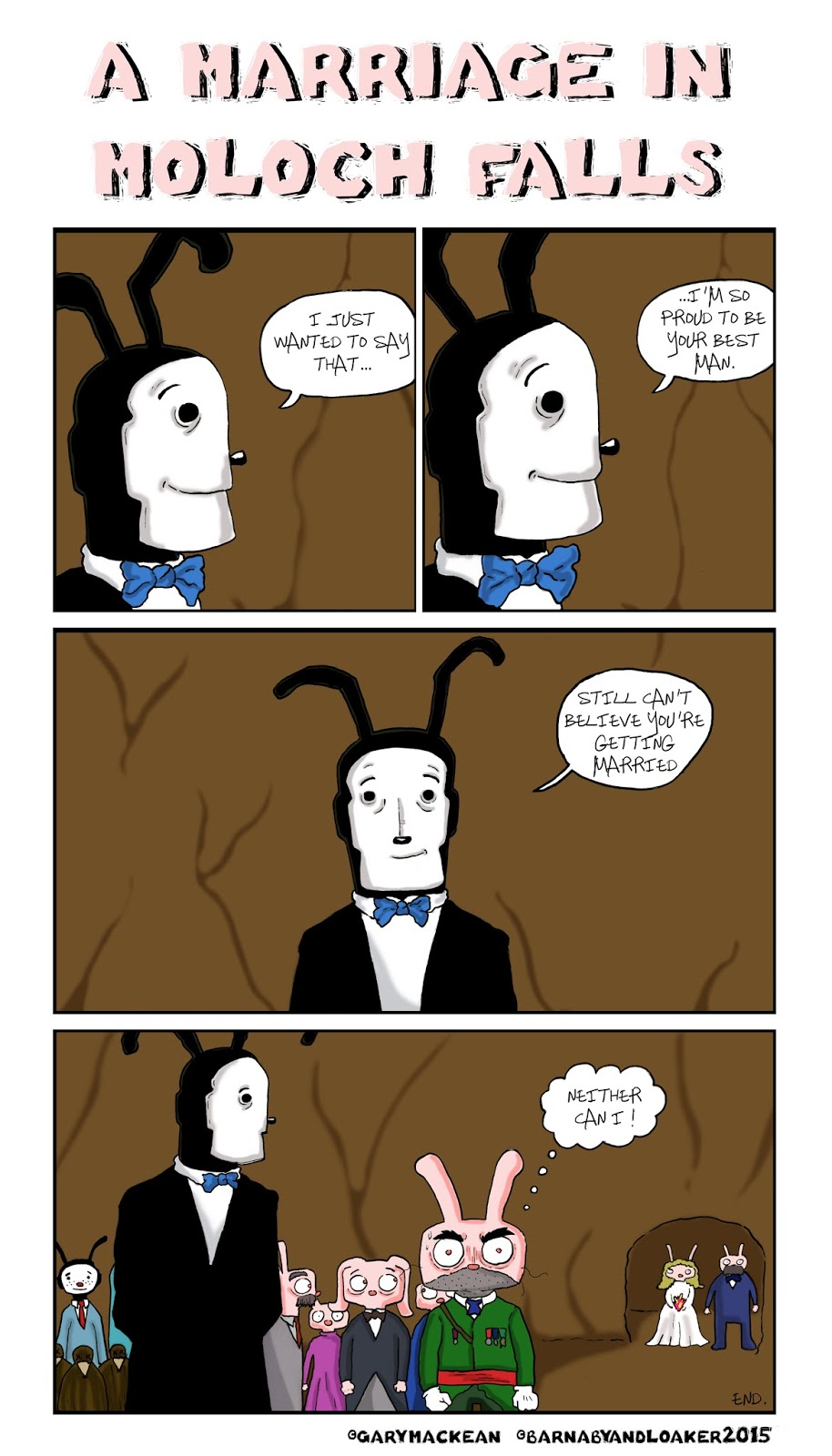 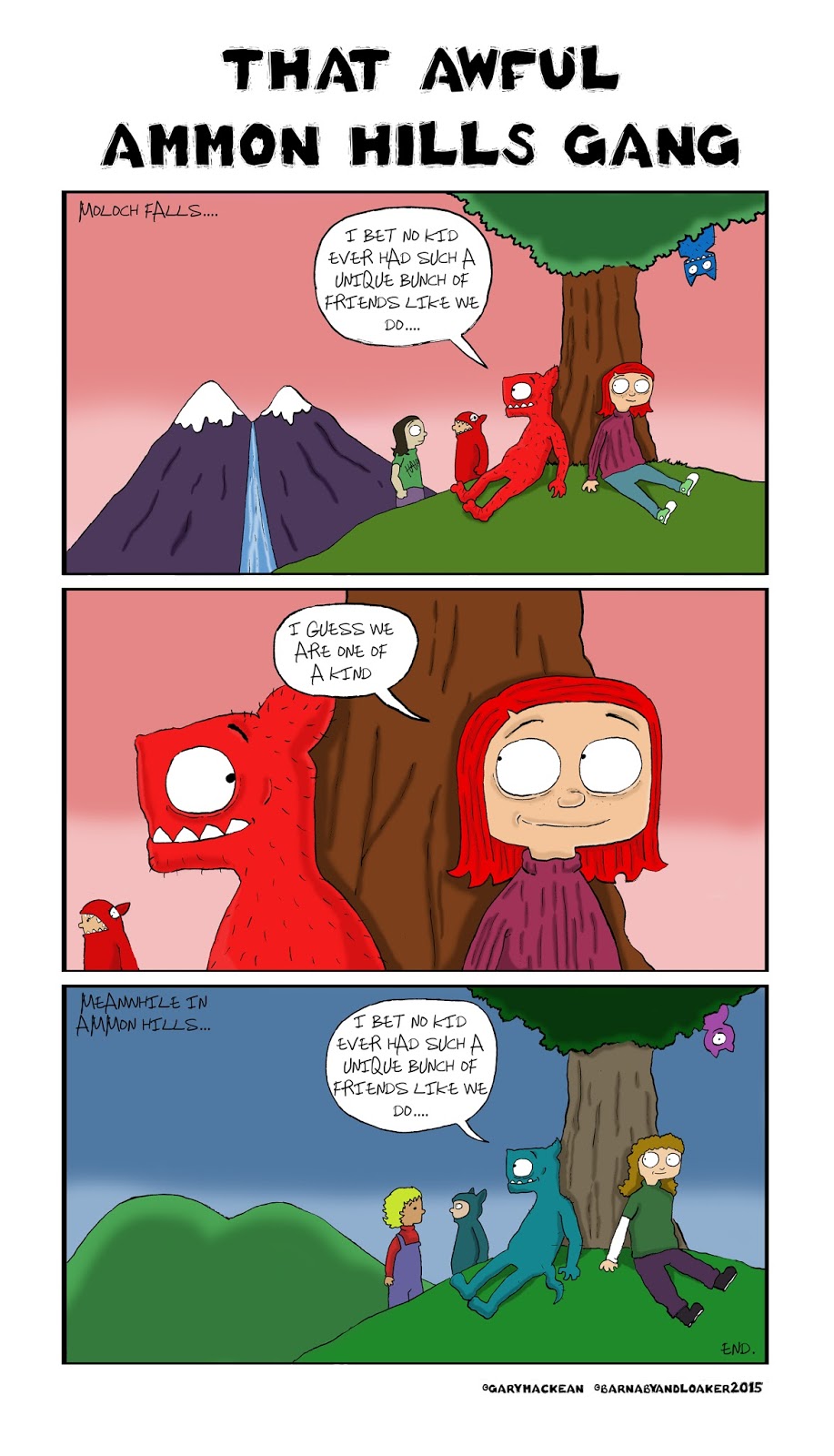 Barnaby has had several counterparts/Barnaby-esque characters including school bully Aldbug Lobings, His evil doppelganger Bartleby Banks, Kathy's ex-boyfriend Barney and the greeny blue character who appears in the final panel of this issue.
Posted by Barnaby and Loaker at 00:05 2 comments: